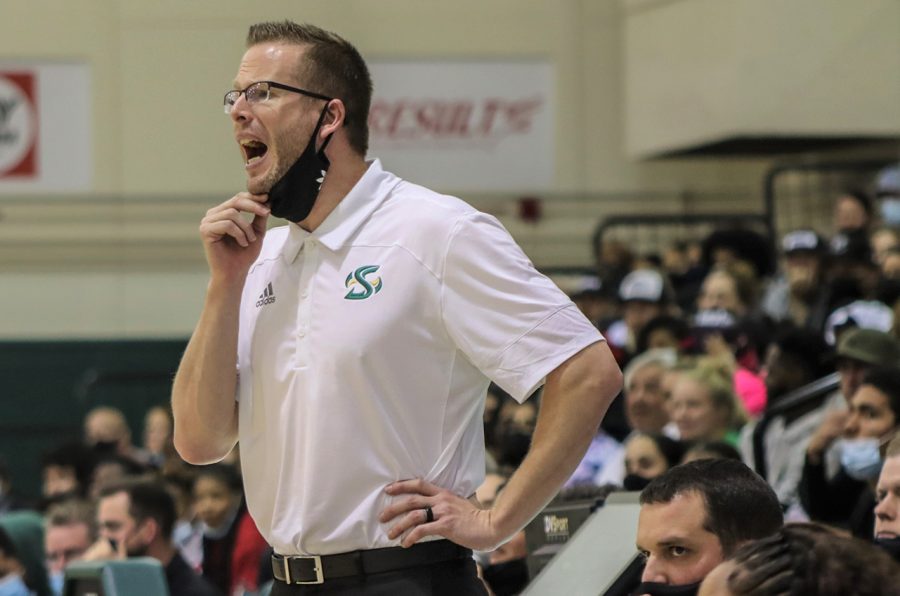 Mark Campbell’s love for the game of basketball would begin to grow when he followed his brother around from gym to gym and game to game.  With a professional boxer for a dad and a basketball player for a brother, Campbell’s household nurtured a competitive edge within him.

This led him to become a D1 athlete and begin his college career at Cal Poly, but after one season he transferred to Clackamas community college. He eventually ended up at the University of Hawaii.

As a point guard for the Warriors, he led the team to a school record of 27 wins and a bid for the NCAA tournament.

After Campbell’s senior season he stayed at the University of Hawaii as a graduate assistant for the basketball team.

“During that year I was doing film and helping in offices and I absolutely loved it,” Campbell said. “And that’s when I knew, ‘hey, I want to do this for a career.’”.

Campbell’s first stop in his coaching career was at his alma mater Clackamas Community College. He coached from 2005-2007 and won one conference championship.

He then took his talents to the Division 1 level at Pepperdine University for a year and then to St. Mary’s before ending up in Oregon where he had the most influence as a coach.

Campbell’s first coaching stop in Oregon was at Oregon State during a time when they were having a total rebuild with only one scholarship player on the roster.

“I switched over to the women’s side and went to Oregon State, which was the worst program in college basketball at the time,” Campbell said.

After turning that program into a final four contender, Campbell stayed in the state but moved to the University of Oregon, where he recruited some of the most decorated college players we have seen today.

He spent seven seasons with the Ducks, winning the Pac-12 regular-season title three times, the Pac-12 championship twice, five NCAA tournament appearances, and a trip to the Final four in 2019.

That 2019 team had players such as WNBA 2020 number one draft pick Sabrina Inousco, the number two pick Satou Sabally and the eighth pick, and WNBA champion Ruthy Herder, all of whom Campbell played a big part in recruiting.

With the help of Campbell, Oregon had the number one draft class in 2020 but the season was derailed by the COVID-19 pandemic.

On April 16, 2021, Campbell was hired at Sac State to recruit talent and turn a losing program into a winning one.

“He really cares about the kids and everyone he comes in touch with, and really wants to make this special place and community that any Sac State alumni and Sacramento residents can be proud of,” assistant coach Xavi Lopez said.

He also has the women’s basketball team playing the best basketball we have seen in the last seven years. They finished the season 14-16 and 10-10 in the Big Sky which is the biggest turnaround the program has ever had.

“He’s really a great person and more coaches need to look to him to be a good all-around coach,” Herder said.