When crews finally tamed a wildfire on Mana Road that spread across part of the Big Island last year, the fire had already scorched 42,000 acres. The charred area — roughly the size of urban Honolulu — made it one of the largest wildfires in state history.

It also burned through the Division of Forestry and Wildlife fire response budget. The division is part of the state Department of Land and Natural Resources, and the Mana Road fire cost the state about $336,000.

As lawmakers try to nail down the budget for the next fiscal year, DOFAW is requesting $1.1 million for its wildfire program, which will include hiring 19 more firefighters. The state has about 140 trained firefighters on its payroll this year. 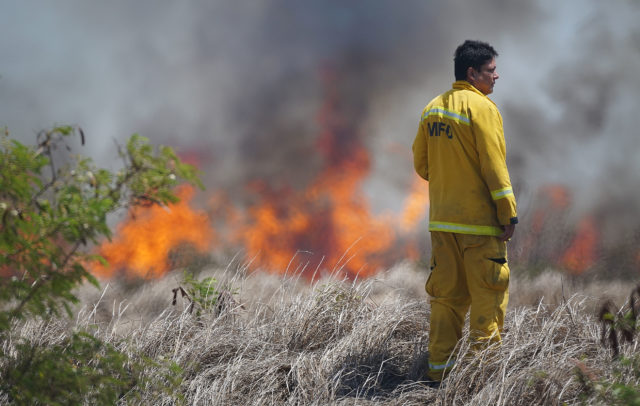 The state Department of Land and Natural Resoures is seeking additional funds for a wildfire protection program. Cory Lum/Civil Beat/2019

In recent decades, wildfires in the state have grown more frequent and intense, fueled by climate change and poor land management. As a response, legislators have steadily increased funding for the DOFAW firefighters.

“It’s a really important ecosystem protection measure for us to improve our capacity to take control of these wildfires and restore them afterward,” Rep. David Tarnas, who chairs the House Water and Land committee, said. “It’s a top priority for me.”

The funds will also go toward overtime costs, contracts for helicopter operations, and the replacement and upgrade of critical equipment, according to DLNR’s supplemental budget overview.

In years past, the amount the agency received from the Legislature often fluctuated. It could be a few hundred thousand dollars or a few million dollars per fiscal year, with a rolling average of about $1.1 million, Michael Walker, DOFAW’s state fire protection forester, said.

“For several years, we were behind, sort of underfunded for the amount of money that we were spending on fires,” Walker said. “In the 2019 legislative season, they brought us up to our rolling average, which has been really helpful.”

The expenditure for fire suppression statewide has also varied, with an average cost of about $992,250 since 2010. Weather conditions often play a role in these shifts, Walker said.

“2012 was an extremely high fire year,” Walker said, adding that there were three fires on Kauai as well as others on Maui, Hawaii island and Oahu.

Any remaining balance at year-end is spent on supplies, such as personal protective equipment, machinery, and prevention and pre-suppression activities like fuel reduction, Walker said.

But, when the state overspends on its fire budget, other programs such as forestry, wildlife and native ecosystems will be tapped to make up for the shortfalls, Walker added.

Costly wildfires can sometimes deplete fire response funds early. In 2016, for example, the state used up its $500,000 budget four months before the fiscal year ended, which was the third time it did that since 2010, Hawaii News Now reported at the time.

“It has been a recurring problem,” Tarnas said. “When they don’t have sufficient budget to fight fires, they have to use accounting methods to move funds from other accounts to pay for that firefighting effort. And then, later, reimburse the accounts that they took the money from.”

So far, in the current fiscal year which began July 1, 2021, the state spent $592,531 fighting fires. On top of the Mana road fire, there were five other smaller fires on Hawaii island, two on Oahu and two on Kauai.

“There is always the concern that the budget will be exhausted before the end of the fiscal year as we now have a year-round fire season,” Walker said.

DLNR said that climate change is making fires “larger and more frequent” in its budget overview.

In 2019, Clay Trauernicht, a University of Hawaii wildland fire researcher, found that wildfires increased fourfold in recent decades. He also found in his research that abandoned farming operations from the 1960s left tens of thousands of acres decayed and rampant with invasive weeds — fuel for future burns.

Tarnas said that wildfires are not a problem unique to any particular sland. Instead, he believes that managing the risk should be a statewide priority.

“We need to give them the sufficient resources to be able to fight these fires,” Tarnas said of DLNR’s fire and emergency response program. “They shouldn’t have to keep coming back every time and asking for it. It should be in the base budget moving forward — because this is a long-standing problem that is going to be with us for a long time.”