by Duong
in World

Article 5 of the Pakistan Constitution states the following, according to the Pakistani news channel Geo TV:

(1) Loyalty to the State is the basic duty of every citizen.

(2) Obedience to the Constitution and law is the [inviolable] obligation of every citizen wherever he may be and of every other person for the time being within Pakistan.

Moments after Suri dismissed the “no-confidence” resolution against Khan on Sunday, Khan announced he had advised Pakistan President Arif Alvi to dissolve Pakistan’s National Assembly under Article 58 of the Pakistan Constitution. The prime minister then asked Pakistan’s public to prepare for fresh national elections in a televised address. 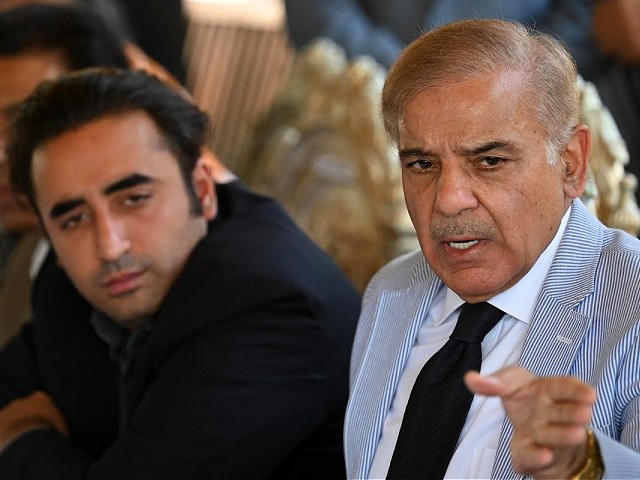 Pakistan’s opposition leaders Shehbaz Sharif (R) and Bilawal Bhutto Zardari (L) speak during a press conference in Islamabad on April 4, 2022. Pakistan’s Supreme Court was hearing arguments on April 4 around Prime Minister Imran Khan’s shock decision to call an early election, sidestepping a no-confidence vote that would have seen him booted from office. (Photo by AAMIR QURESHI/AFP via Getty Images)

Article 58 of the Pakistan Constitution states, in part, “[T]he President may also dissolve the National Assembly in his discretion where, in his opinion, … a situation has arisen in which the Government of the Federation cannot be carried on in accordance with the provisions of the Constitution and an appeal to the electorate is necessary.”

Pakistan Information Minister Fawad Chaudhry told ministers of Pakistan’s parliament on April 3 that Islamabad had learned of “an operation for a regime change by a foreign government.” This revelation paved the way for Suri, a close ally of Khan, to declare the “no-confidence” motion unconstitutional.

Some observers of Pakistan’s planned “no-confidence” motion against Khan believed the prime minister would be successfully ousted by the vote. After Khan’s administration scrapped the vote on Sunday, Pakistani opposition parties on Monday held out hope that Pakistan’s Supreme Court might overrule the decision in the coming days.

“All eyes will now be on the position of Pakistan’s powerful military. They are widely seen as having helped Imran Khan into power in 2018,” the BBC noted on April 4.

“Now an alleged rift between the two sides prompted the opposition to launch this attack on him,” according to the British broadcaster’s analysis.

The BBC pointed to Khan’s refusal to “sign off on the appointment of a new chief of Pakistan’s powerful ISI intelligence agency” in October 2021 as the source of Khan’s current power struggle with the Pakistani military.

Russian Navy Evacuates Flagship. Ukraine Claims It Was Hit By A Missile

(CNN)One of the Russian Navy's most important warships is either floating abandoned or at the bottom of the Black Sea, a massive blow to a military struggling against Ukrainian resistance 50 days into Vladimir Putin's invasion of his neighbor.Russian sailors have evacuated the guided-missile cruiser Moskva, the flagship of its...

A former prisoner who made it to America with his family days ago tells NR about his harrowing ordeal inside China’s detention-camp system. Read More Here

Johnny Depp and Amber Heard arrive at the High Court as libel hearing continuesJohnny Depp’s multi-million defamation lawsuit against his former wife, Amber Heard, began in Virginia on Monday morning with jury selection. Seven jurors and four alternates were picked to hear the case.He claims a 2018 article written by...

NewsWorldEuropeAt least five children died in the train station attack that Russia denied responsibility for Russian sanctions 'will bite' but take time to 'feed through the financial system', says ministerRussian rocket have hit and destroyed Dnipro airport in the east of Ukraine, Ukrainian officials have confirmed. Rockets fired into Ukraine’s...