Labor And Agents: Juan Lozano’s Anything-But-Ordinary Path To Being An Agent

Most people are lucky to have one interesting career in their life, but Juan Lozano has had at least four. He’s been a courthouse lawyer, worked in football operations at four colleges, was briefly a Spanish-language MLB color man, and is now an increasingly successful football coaches agent.

It takes a lot of energy to do all of that and Lozano sounded like a man so excited he might burst in a telephone interview from Hawaii last month, after attending a news conference to introduce one of his first clients, Timmy Chang, as the University of Hawaii’s new head football coach. 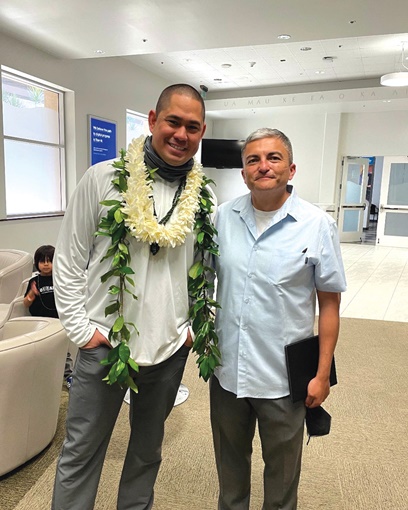 “It was a crazy week but it was one of the best weeks in my professional life,” Lozano said. “I am so happy.”

Lozano is an agent at Red Envelope Sports, a subsidiary of Yee & Dubin Sports, which represents NFL players and college football and NFL coaches. Don Yee, best known as agent to Tom Brady, has hired Lozano four times, including twice as an intern when he was at Cal as an undergraduate and again when Lozano was at Wisconsin Law School, and the last time in 2014 to work as a coaches agent.

Lozano is “passionate with a strong work ethic,” Yee said in an email. “He is one of the few Latino agent/managers in our industry, so he is breaking through barriers already. He’ll be part of a new and more diverse generation of leaders in the business.”

Diversity has never been a hotter topic in the business of hiring football coaches than after former Miami Dolphins coach Brian Flores, who is Black, filed a lawsuit last week against the NFL and all of its clubs alleging racial discrimination. The NFL and the Dolphins, New York Giants and Denver Broncos — three teams whose interactions with Flores were detailed in the lawsuit — all denied the allegations.

Lozano’s story is the American dream. His mother is a Mexican immigrant and his father is a Mexican American, born in the Texas border town of Brownsville. Lozano said he had “a rough childhood,” growing up in a tough neighborhood in the National City area of San Diego.

There were drugs in his neighborhood, specifically PCP, but he said, “I have never done a drug in my life.” Instead, he worked. He started by selling baseball cards and candy in his neighborhood when he was 9. By the time he was 13, he had a job at a church, answering phones, washing dishes and serving free meals.

He got into UC Berkeley and in his freshman year sent an email to Tom Holmoe, who is now the athletic director of BYU but was then the head coach of the Cal football team, offering to help out in any way he could. To Lozano’s surprise, Holmoe took Lozano up on his offer. He worked as a student manager of the Cal football team and started meeting people who are working in the business today, including Yee and Chang.

Back then, Chang was a star high school quarterback from Hawaii. He traveled to Berkeley and Lozano picked him up at the airport, accidentally locking his keys in his car. It’s something Lozano remembers vividly but Chang doesn’t remember at all.

What Chang remembers is hanging out and talking football and then meeting Lozano again when he hired Yee and Steve Dubin as his agents for his NFL career. “Juan was working for them,” Chang said. “And you know it’s one of those things in our relationship where, ‘Oh, I see you again; I met you here,’” Chang related.

“Ten or 11 years later, I become the head coach [at Hawaii] and Juan has played an instrumental part in getting me this job,” Chang said. Lozano told Chang things that would happen in the interview process before they happened and fought for him the whole way.

“Man, he’s my pit bull,” Chang said. “For me, I know this: There were times if I had any type of doubt or any type of thing in my mind that was negative, I could call Juan and he could fix me in a second. He’s a master motivator.”

And he’s, still, always working. Lozano was traveling when interviewed three times for this story. In December, he was driving in New Mexico to the New Mexico Bowl. In January, he was about to catch a flight home from Hawaii. And last week he was driving from the Senior Bowl in Mobile, Ala., to the airport in New Orleans. The coaches hiring season has been nuts, Lozano said.

That’s OK. Lozano is an accomplished multitasker. He gambled and won on baseball while he was in law school and also did a stint as the color man on a Spanish radio station because he met the guy who owns the station. He has colorful stories about people he represented at his own small law practice, including a semi-famous L.A. media personality who took drugs for the first time because he thought it would help him tap into his creativity. He remembers the assistant district attorneys laughing when they handed him the case file. “My guy wigged out,” Lozano said.

Yee is Lozano’s mentor and the reason he is the person he is today, Lozano said. While Yee is famously press-shy, Lozano is loquacious. “I am very different from Don Yee, but in some ways I am the same,” he said.

Lozano’s response: “But what are you doing to help others?”