by NewsReporter
in World

Kazakhstan President Kassym-Jomart Tokayev, whose country sits on the United Nations Human Rights Council, on Friday ordered his security forces – reinforced over the past few days with Russian paratroopers  – to shoot demonstrators in cold blood, without warning.

Kazakhstan has been swept by huge and increasingly violent protests for the past week, triggered by a January 1 increase in fuel prices. The protests expanded to include criticism of government corruption, resistance to political repression, and demands for Tokayev and his still-powerful predecessor, Soviet-era strongman Nursultan Nazarbayev, to relinquish power. 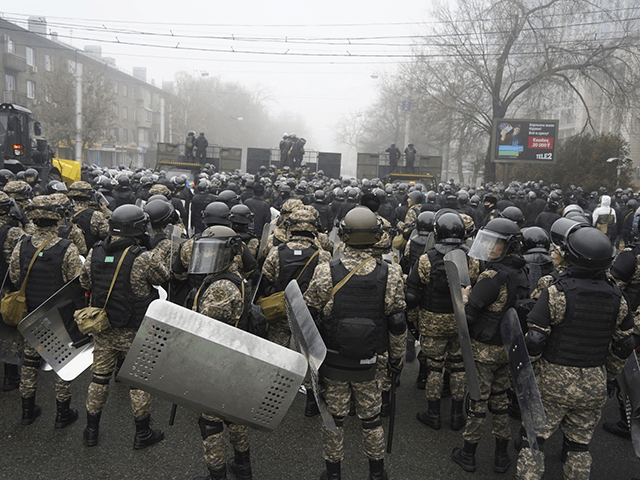 Dozens of demonstrators have been killed in clashes with the police, and the government claims at least a dozen police officers have been killed, including one allegedly beheaded. Government buildings were stormed and vandalized in the commercial hub and former national capital, Almaty.

The Russian effort to reinforce Kazakh security forces has become a full-scale military intervention, with over 70 troop transports landing at the Almaty airport, which was forcibly “recaptured” from protesters, Reuters noted.

Kazakhstan’s President Kassym-Jomart Tokayev said he ordered his troops to shoot to kill to put down a countrywide uprising https://t.co/OQMe9ZmAO9 pic.twitter.com/jjrxjNp9YA

The Collective Security Treaty Organization (CSTO) – a Russia-led regional military alliance that includes Armenia, Belarus, Kyrgyzstan, and Tajikistan as well as Kazakhstan– said 2,500 “peacekeepers” have been sent into Kazakhstan so far, and more could be sent if needed.

Tokayev described the deployment as a “counter-terrorist” operation in a televised address to the nation on Friday, railing against the protesters as “bandits” and stooges of foreign powers plotting to overthrow him.

“Terrorists continue to damage state and private property and use weapons against civilians. I have given the order to law enforcement to shoot to kill without warning,” he announced.

“The militants have not laid down their arms, they continue to commit crimes or are preparing for them,” Tokayev said.

“Those who don’t surrender will be eliminated.,” he vowed.

Tokayev said the uprising has been brought under control, thanking Russian leader Vladimir Putin for help along with CSTO nations and the authoritarian governments of China and Turkey.

China had actually entered a period of rocky relations with its neighbor Kazakhstan before the uprising, in part because Kazakh leaders felt the costs of joining China’s Belt and Road infrastructure program outweighed the benefits. They also criticized China for being selfish and insensitive to Kazakhstan’s water needs and for citing coronavirus restrictions to slow railroad traffic from Kazakhstan into China while Chinese trains crossed the border unimpeded.

Chinese dictator Xi Jinping sent a message of support to Tokayev on Thursday, stating the regime in Beijing “resolutely opposes external forces deliberately creating turbulence and instigating a ‘color revolution’ in Kazakhstan,” a reference to Tokayev’s claims that the protest movement was whipped up by Western powers to undermine his rule.

“China is willing to provide necessary support to Kazakhstan to help Kazakhstan tide over its difficulties. Regardless of the risks and challenges encountered, China is Kazakhstan’s trusted friend and reliable partner,” Xi told Tokayev.

Turkish strongman Recep Tayyip Erdogan also supported Tokayev in a teleconference on Thursday, offering condolences for those killed in the riots and assistance with suppressing the demonstrations.

“We deeply regret the incidents and deaths in Kazakhstan. Kazakhstan’s peace and stability are our biggest priorities. Turkey will always continue to be on Kazakhstan’s side,” a spokesman for Erdogan said.

Although Tokayev had earlier made some conciliatory remarks about meeting with protest leaders to discuss their grievances, he scoffed at that notion as “nonsense” pushed by Western governments on Friday.

“What negotiations can be held with criminals, murderers?” he said. 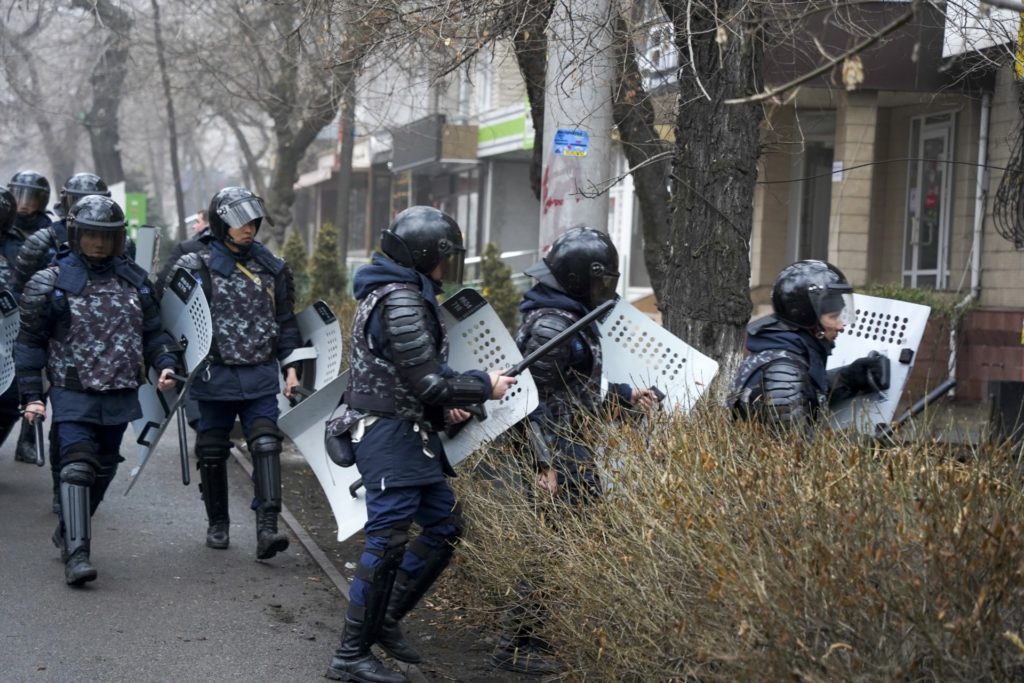 This seemed to be a rebuke to the Biden administration, which said on Thursday it was “closely monitoring” the situation in Kazakhstan and had “questions” about the CSTO military intervention.

State Department spokesman Ned Price on Thursday repeatedly condemned “acts of violence and destruction of property” by the demonstrators, but also said the United States, “and frankly the world,” will be “watching for any violation of human rights.”

Price seemed awkwardly concerned about the Russian intervention in Kazakhstan, but despite prodding from reporters, refused to unequivocally condemn it.

“We again call with our partners on the CSTO peacekeeping forces and law enforcement to respect human rights in order to support a peaceful resolution. That is what the United States is supporting. It is what we stand ready to help facilitate in any way that we can,” he said.

Kazakhstan was elected to a seat on the U.N. Human Rights Council (UNHCR) in October, despite its long history of political repression, strongman rule, and the questionable election that put Tokayev in office in 2019.

“The election of Kazakhstan to the main human rights body of the world organization means it is recognized as an active and responsible participant in fostering international standards in the field of human rights and freedoms protection,” UNHCR said when announcing Kazakhstan’s two-year seat.

As of Friday morning, UNHCR has been silent on the violence in Kazakhstan.

A spokesman for U.N. Secretary-General Antonio Guterres said on Thursday the United Nations is “following the situation very closely” and has been in touch with several Kazakh officials, although Tokayev was not named as one of them.

“During these exchanges, appeals to exercise restraint, refrain from violence and promote dialogue to address the situation were reiterated by Natalia Gherman on behalf of the Secretary-General,” said Guterres spokesman Stephane Dujarric.

Russian Navy Evacuates Flagship. Ukraine Claims It Was Hit By A Missile

(CNN)One of the Russian Navy's most important warships is either floating abandoned or at the bottom of the Black Sea, a massive blow to a military struggling against Ukrainian resistance 50 days into Vladimir Putin's invasion of his neighbor.Russian sailors have evacuated the guided-missile cruiser Moskva, the flagship of its...

A former prisoner who made it to America with his family days ago tells NR about his harrowing ordeal inside China’s detention-camp system. Read More Here

Johnny Depp and Amber Heard arrive at the High Court as libel hearing continuesJohnny Depp’s multi-million defamation lawsuit against his former wife, Amber Heard, began in Virginia on Monday morning with jury selection. Seven jurors and four alternates were picked to hear the case.He claims a 2018 article written by...

NewsWorldEuropeAt least five children died in the train station attack that Russia denied responsibility for Russian sanctions 'will bite' but take time to 'feed through the financial system', says ministerRussian rocket have hit and destroyed Dnipro airport in the east of Ukraine, Ukrainian officials have confirmed. Rockets fired into Ukraine’s...