Hawaii Tourism Is Rebounding But Japan Remains A Barrier

by NewsReporter
in Honolulu

Riding pent-up demand from U.S. travelers, Hawaii’s tourism industry is heading toward the summer with momentum approaching that of the heady days before the Covid-19 pandemic when the state posted record numbers.

Now, economists and industry executives say, there’s just one big piece of the puzzle missing: visitors from Japan. The good news is that a significant return of tourists from Hawaii’s third-largest market appears to be on the horizon.

Even without Japan, Hawaii is on a roll. The state greeted more than 25,000 air passengers a day on average for March, approaching pre-pandemic levels, according to Eugene Tian, Hawaii’s chief state economist. And while there aren’t quite as many tourists as before the pandemic, those who are coming are spending more. 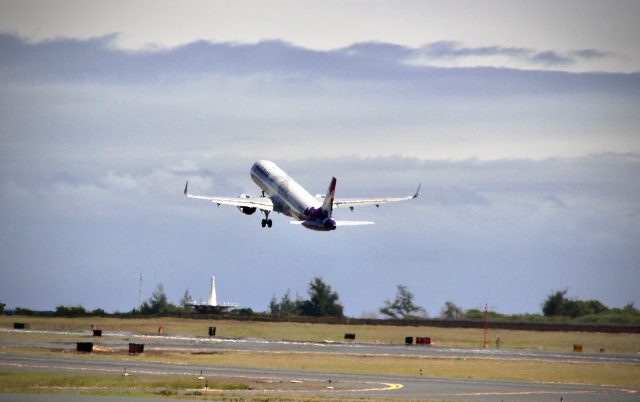 And that was before Gov. David Ige lifted a requirement that visitors show proof of vaccination or a negative Covid test to avoid a five-day quarantine upon arrival, making it even easier for people to visit.

However, travelers from Japan are nearly nonexistent in the islands. Japan has traditionally been Hawaii’s largest foreign market and the third-largest market segment behind the West and the East mainland markets.

“The recovery from Japan is only 1.8%, so we’re still down 98%,” said Tian, who heads DBEDT’s economic research division.

But that might change soon. In its most recent economic forecast for Hawaii, published March 6, the University of Hawaii Economic Research Organization predicted that Japan visitors would bounce back significantly by summer.

“After a weak first quarter, Japanese visitors will begin to return in the spring and will recoup half of pandemic era losses by the end of the year,” UHERO said. “Visitors from other international markets will rise strongly in the second quarter, recovering to three-quarters of their pre-pandemic level by the fourth quarter of this year.”

In an interview, UHERO’s executive director Carl Bonham said it doesn’t appear Japan travel to Hawaii is returning for Golden Week, a collection of national holidays celebrated in late April and early May that typically brings a flood of Japanese visitors to the islands.

One issue for now is a shortage of airplane seats. For example, Hawaiian Airlines, the state’s dominant carrier is now operating just four weekly flights to Japan, compared to 35 weekly flights before the pandemic. Tian said airport data shows that Hawaiian is expected to add flights between Hawaii and Japan in May, and Japanese carriers ANA and Japan Air Lines will add flights in the summer.

“We do see some flight increases in May, and there will be more added in June,” he said. But there’s still one factor limiting the growth of flights — a cap on passenger arrivals in Japan.

Restriction On Passenger Arrivals Is An Obstacle

Previously hindering travel to Hawaii from Japan was a two-week quarantine requirement for residents returning to Japan. The result was anyone vacationing in Hawaii would have to tack on an extra two weeks to quarantine after going back home – something few would-be visitors could manage.

That changed in March, when Japan lifted the quarantine requirement for returning residents who were vaccinated and able to obtain negative PCR tests before traveling home and upon arrival, said Kazuyo Sigler, Consul Staff of the Consulate General of Japan in Honolulu.

But a final bureaucratic obstacle remained as Japan is limiting the number of passengers allowed to arrive per day.

“We are encouraged by Japan’s progressive easing of travel restrictions,” Hawaiian’s president and chief executive, Peter Ingram, said in an email. “However, a passenger arrivals cap for all airlines operating flights to Japan limits our ability to restore more of our service.”

But that too seems to be changing.

“The Japanese government’s decision in mid-March to increase the arrivals cap to 7,000 from 5,000 is a promising sign, and we are looking forward to restrictions continuing to ease so we can resume more flights from this key Hawaii visitor market,” Ingram said. 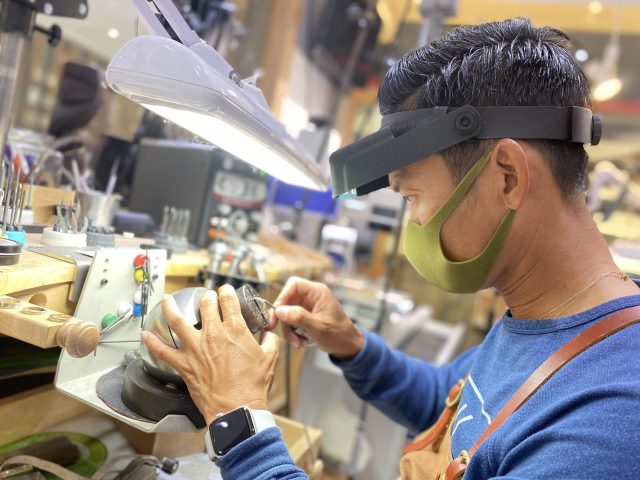 Howard Miao, owner of the jewelry store Maxi in Waikiki, says the loss of Japanese tourists has devastated his business. But he hears visitors could finally return this summer. Stewart Yerton/Civil Beat /2021

The consequences for Hawaii’s economy are significant. It’s not merely that Japanese travelers fill hotel rooms and restaurant tables like other tourists, which they do. But there are also large companies with staffs that have been devastated by the lack of visitors.

In April 2020, for example, JTB-Hawaii, the local unit of Japan’s giant travel agency JTB, announced it would furlough some 421 workers in Hawaii, and later it made more than 100 of those furloughs permanent, according to notices sent to Hawaii labor officials. Likewise, Watabe Wedding, which produces Hawaiian weddings for Japanese visitors, announced 240 workers would be furloughed, over a range of occupations, including cooks, drivers and makeup artists.

It’s unclear how many of those employees have been able to go back to work as tourism has reopened generally, but not from Japan. JTB and Watabe executives declined to comment. But Howard Miao, owner the Waikiki jewelry store Maxi, said he’s seen very little business from the Japanese tourists who make up 90% of his customers.

“For summertime, I hear a lot of people have booked tickets,” he said. “But we’ll see.” 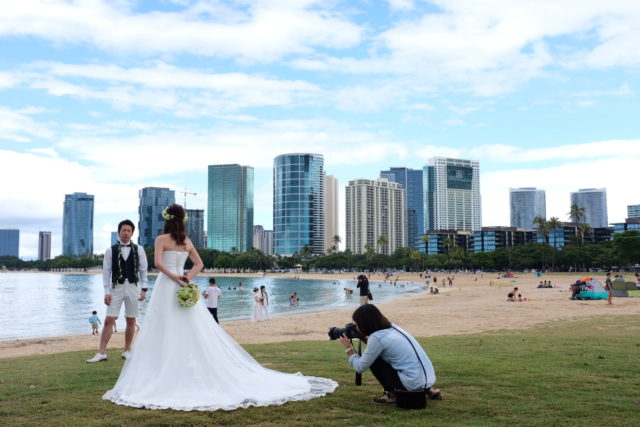 A mainstay of Hawaii’s tourism industry, the Japanese wedding business, illustrated here in 2018, has dwindled amidst the pandemic. Stewart Yerton/Civil Beat

There are also implications for the broader tourism economy. Although leisure travelers from the mainland have flocked to Hawaii, the pent-up demand driving those visitors eventually will subside, says Jerry Gibson, president of the Hawaii Hotel Alliance, a tourism trade association.

With little major group business to fill the gap, Gibson said, Hawaii will need the Japanese visitors as well as short-term group business simply to tread water. While March was good, thanks in part to Spring Break visitors, Gibson said, “There are things we need to make the whole cake that aren’t there yet.”

Bonham agreed the strong mainland business won’t last forever. Many people who have visited Hawaii in the past year simply won’t want to come back soon, he said. Plus, inflation is eroding disposable household income to a point that many people don’t have the cash for a pricey trip.

“Everybody but the wealthiest travelers are being impacted by inflation,” he said.