by Duong
in Hilo

Hawaii will remain an outlier among states as Gov. David Ige said an indoor mask mandate will stay in place “for now” to prevent the spread of the coronavirus, despite updated federal guidelines that drop mask recommendations for most Americans.

With Covid-19 cases and hospitalizations in decline across the nation, the Centers for Disease Control and Prevention announced Friday a new set of metrics that would ease masking recommendations for more than 70% of Americans, including all of Hawaii.

The decision marks a shift in strategy away from trying to prevent all infection toward learning to live with the virus. 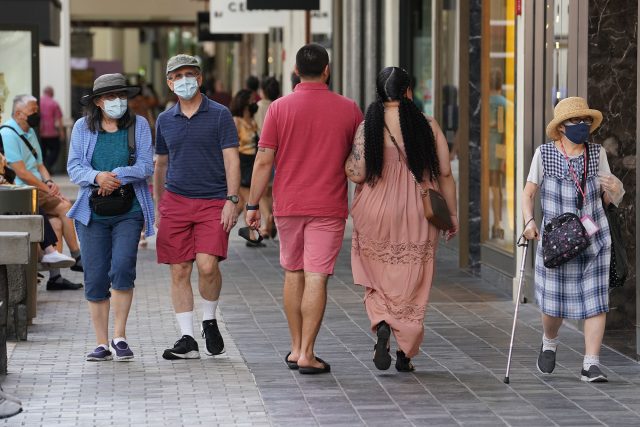 Hawaii already was the last state not to loosen its blanket indoor mask mandate in some form before the CDC changed its advice. The state will keep its mandate “for now,” Ige said in a statement. It had earlier dropped the outdoor mandate, although many people still wear them on the streets.

“We are watching disease activity across the state and globally, especially as other changes are made to current programs across the U.S. and at the county level,” Ige said. “We will adjust accordingly.”

The state’s mask mandate is scheduled to expire March 25 alongside Ige’s most recent emergency proclamation.

Under the CDC’s new framework, communities will be evaluated as “high,” “medium” or “low” risk for severe disease and infection. Residents of medium and low risk areas do not need to wear face masks indoors under these updated guidelines, while the 28% of Americans living in high-risk communities are advised to continue masking indoors regardless of vaccination status.

The CDC encourages immunocompromised or otherwise vulnerable people living in medium risk areas to consult their doctor on whether to continue masking indoors. Recommendations for schools align with guidelines for the rest of the community.

“We want to give people a break from things like mask wearing when our levels are low and then have the ability to reach for them again should things get worse in the future,” said CDC director Rochelle Walensky in a media briefing Friday.

The Federal Transit Administration’s public transportation mask mandate, set to expire March 18, and will be revisited in “the weeks ahead,” Walensky said.

All but one of Hawaii’s counties are considered medium risk as of Friday, with the Big Island the only community in the state to be considered low risk.

Explaining his decision not to adhere to the CDC’s changing guidelines, Ige pointed out that the CDC had eased mask-wearing recommendations before only to have to reverse that decision with the emergence of the delta variant in the fall.

“Hawaii kept its indoor mask requirement in place during that time, protecting residents and preventing the rapid spread of the virus, resulting in the second lowest COVID fatality rate in the country,” Ige said in the statement.

The situation has changed since last year, however. With over 200 million Americans fully vaccinated, 100 million receiving a booster shot and millions more with a prior infection, Walensky said the country has reached “widespread population immunity” guarding against severe disease. This was at play during the recent omicron surge, a variant that pushed infections to record heights but, overall, saw milder outcomes.

So rather than basing Covid-19 response primarily on case numbers and positivity rates, the CDC is predicating its “community levels” around hospitalizations.

“This updated approach focuses on directing our prevention efforts towards protecting people at high risk for severe illness and preventing hospitals and health care systems from being overwhelmed,” Walensky said.

Hawaii’s seven-day average number of cases fell 68% in the last two weeks, from 715 per day on Feb. 10 to 227 on Wednesday. 76.4% of residents are fully vaccinated, while 37.2% have received a booster shot, according to the latest state figures.

The Hawaii Department of Health supports Ige’s decision, spokesman Brooks Baehr said, emphasizing that Hawaii is not alone in maintaining its mask policies, with some large municipalities keeping their mandates independent of the state.

“The state of Pennsylvania does not have a statewide mask mandate, but the large city of Philadelphia does,” Baehr said in a call with reporters. “I understand that a lot of these municipalities and some of the counties are now looking at revising their mask mandates. And believe you me, we are also keeping a close eye on that.”

However, some Hawaii groups and community leaders believe the state should not delay in following the CDC’s new guidelines on indoor masking.

“We support businesses and other organizations making the decision on what is best for their organization, employees and customers, as to whether to require patrons to wear masks indoors, following updated CDC guidelines, which say it is now safe to remove mandate,” Chamber of Commerce Hawaii president and CEO Sherry Menor-McNamara wrote in an email.

Hawaii counties have made steps to remove other restrictions. Maui county stopped requiring vaccines to dine indoors Monday, while Honolulu mayor Rick Blangiardi has said he is planning to drop a similar vaccine-or-test mandate in early March.

Maui’s Mayor Michael Victorino also announced Friday that all public health emergency rules would be repealed as of Tuesday. The Valley Isle also will reopen all three of its camping sites and most community centers.

However, Victorino stressed that only county rules would be eased and the statewide mask mandate would remain in place per Ige’s order.

“With COVID-19 new cases and hospitalizations continuing to trend downward dramatically, it’s time for our residents to return to the activities that they enjoy — camping with friends and family and attending birthday parties, baby luau and other events at community centers,” Victorino said.