by Duong
in Pearl City

The executive director leading Honolulu’s struggling rail project now says that she will not accept a $25,000 bonus for her first year on the job, days before the board that oversees her was slated to vote on that award.

Lori Kahikina, head of the Honolulu Authority for Rapid Transportation, informed agency board members of her intent in a letter Thursday and asked them to forgo any further consideration.

She and her team have made “significant progress” on rail, Kahikina stated.

She added, however: “I also recognize that there is still much more work to be done before we can turn this project into a success story.” 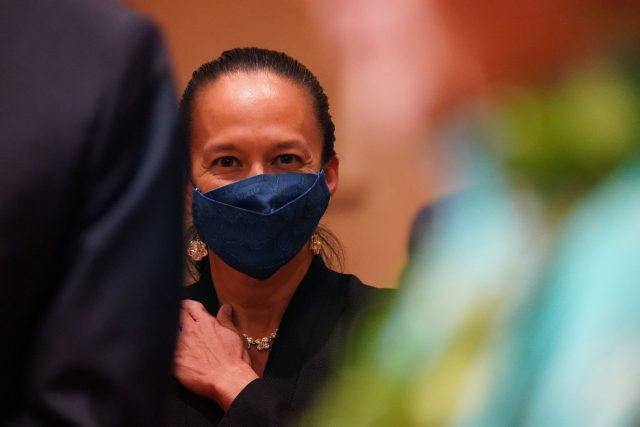 HART Director Lori Kahikina has asked the agency’s board to forgo any further consideration of a $25,000 bonus for her first year at the helm. Cory Lum/Civil Beat/2021

Her letter did not specify further on the decision to decline, and Kahikina did not immediately respond to a request for comment Monday.

The HART board was supposed to consider the final approval of that $25,000 bonus during its meeting to be held later this week.

Earlier this month, when the board’s Human Resources Committee voted 3-1 to approve the bonus, two committee members questioned whether the award would send the right message to the public amid rail’s ongoing budget problems.

“I’m placed in a very difficult position. Although I can appreciate the effort and the work that our current executive has put in since she’s taken over… I can’t, in all fiduciary good conscience, support a bonus at this time,” board member Kika Bukoski said at that March 10 meeting.

Several days after that HR Committee meeting, Honolulu Mayor Rick Blangiardi announced a new proposal to cut the city’s rail line 1.25 miles short of Ala Moana Center and to eliminate the last two stations. That proposal would also cut a 1,600-space park-and-ride facility at Pearl Highlands.

Kahikina earns a $275,000 base salary – more than what Blangiardi earns but still less than the $315,000 salary of her predecessor at HART, Andrew Robbins.

Another former HART executive director, Dan Grabauskas, similarly asked the board to forgo consideration of a $35,000 bonus in 2015 as rail faced an earlier budget crisis. About a year later, he resigned from the job amid mutual agreement with the board.

Melvins won't be letting much grass grow beneath their feet as their tour with Ministry and Corrosion of Conformity winds down this week, as they have announced the Electric Roach U.S. headlining tour for this summer. The five-week trek begins on June 15 in Long Beach, Calif., and runs through...

Camden’s Waterfront Pavilion (formerly the BB&T Pavilion) will host some of the biggest acts in music this concert season, with music to satisfy just about anyone’s taste. Performers like Brad Paisley, the Chicks, and Pearl Jam will all grace the stage this summer in Camden.May5/20: Tim McGraw: McGraw Tour 2022...