Board Of Education Will Start Accepting Applications For School Superintendent

by NewsReporter
in Hilo

The Hawaii Board of Education can finally start accepting applications for the next superintendent to lead Hawaii’s public schools after voting to approve an updated job description during a meeting Thursday.

The board, which is tasked with selecting and evaluating the head of the Hawaii Department of Education, wants to interview applicants by April and select the next superintendent by May.

Former Waipahu High Principal Keith Hayashi has been serving in the position on an interim basis since last August. He has expressed interest in assuming the role on a permanent basis but will have to formally apply, along with other applicants.

Thursday’s vote by the nine-member board to approve the revised job description — which at four pages is twice as long as the previous description — came after lengthy debate over whether to require that applicants have at least a master’s degree. 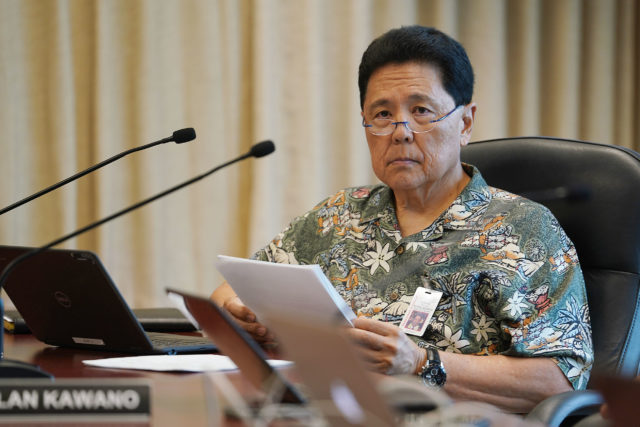 BOE member Kenneth Uemura, whose term expires in June, argued strongly in favor of lowering the education requirement for applicants to just a bachelor’s degree in order to open up the pool of eligibility. Cory Lum/Civil Beat

Board member Ken Uemura, a certified public accountant with no education leadership background, introduced an amendment to strike that requirement so those with only a bachelor’s are not excluded from consideration.

Uemura, who acknowledged that he himself possesses just a bachelor’s degree, argued it would widen the pool of eligible applicants.

“You’re eliminating other people,” he said during the virtual meeting. “You limit it to a master’s, you’re not going to get the guys who have CEO-like qualifications. We’re kind of shortchanging ourselves.”

But there was pushback from other members of the appointed board, who argued that the head of the public school system should inspire others to seek higher learning and it would set the right tone for the DOE.

“I feel very strongly that we not lower the bar of what we dream is possible,” said board member Lyla Berg. “I think it carries a very strong message about not only lifelong learning and its symbolic nature but what its expectations are.”

The board narrowly stuck down Uemura’s proposed amendment on a 5-4 vote.

Those who voted with Uemura included board members Bruce Voss, Shanty Asher and Kaimana Barcarse. Voss and Asher both have law degrees while Barcarse has a master’s in Hawaiian language and culture from UH Hilo.

Uemura’s suggestion — had it cleared — would have broken from convention with regard to the education credentials of recent superintendents. The most recent superintendent, Christina Kishimoto, had a doctorate in education administration, while her predecessor, Kathryn Matayoshi, had a law degree but also business leadership experience.

Hayashi has two master of education degrees from the University of Hawaii Manoa.

Uemura — who has a business background — successfully argued for a separate amendment to the job posting that doubles the required number of years in a leadership role from five to 10, with five of those being in a CEO-type role or similar leadership position.

Voting in support of that amendment with Uemura were Barcarse, Voss, Lynn Fallin and Kili Namauu. 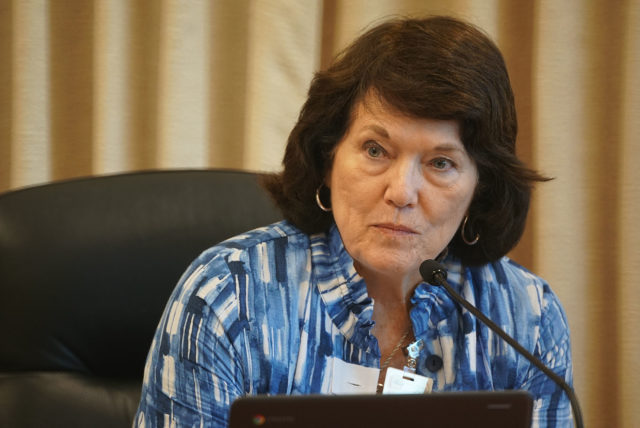 BOE Chairwoman Catherine Payne cast a tie-breaking vote to keep the master’s requirement. “We need to set that high standard,” she said of the person who will lead the DOE. Cory Lum/Civil Beat

The head of DOE does serve much like the head of a large organization, albeit one with 22,000 full-time employees, 171,000 students and $2.1 billion budget.

But BOE Chairwoman Catherine Payne noted that conversations with education advocates over the last few months as a committee worked on revising the job description revealed two strong desires: that the candidate have a “really strong understanding and value for the culture of Hawaii” and that they have “a grounding in education.”

“I think it’s really important for us to honor that,” she said.

The job description — under consideration since last fall — was crafted after much deliberation and consultation with people in Hawaii. Facilitating the search is the National Association of State Boards of Education, backed by a $150,000 grant from the Harold K.L. Castle Foundation and The Learning Coalition.

The final version is longer than the description that resulted in the hiring of Kishimoto, a veteran education administrator and New York native, in 2017.

Under the leadership of Payne, a retired educator, the BOE has made clear it wants to make the current search national. Some written testifiers urged the board to consider someone local with knowledge of the DOE for the position. A letter signed by all 15 complex area superintendents said the person should have a combined 10 years of school-level leadership experience. Others expressed a preference for someone with an understanding of the needs of kids in special education, Hawaiian immersion programs or non-native English speakers.

The permanent superintendent role could pay up to $250,000 a year. The many duties listed in the job description speak to the challenges of the role.

The superintendent must regularly face lawmakers to advocate for DOE funding and also contend with a powerful teacher’s union, which frequently clashed with Kishimoto over her leadership style during the pandemic and so far has not had flattering words for Hayashi.

Last May, Hayashi beat out 14 candidates and four finalists to be selected for the interim role.

A group of Hawaii island principals voiced their support for Hayashi in written testimony, saying he “inherited an entire staff … without the ability to make his own changes.”

At least one community member, “W.Hyde” who identified himself as a grandfather, criticized Hayashi for surrounding himself with “non-experts in the field of education,” being unable to answer questions during board meetings and resorting to “buzzwords that aren’t explained,” and letting his assistants off the hook when it comes to lackluster data on student achievement.

But at least one lawmaker, Rep. Justin Woodson, the House education chair, is eager to see Hayashi continue.

“I don’t think he’s doing a bad job in his role for the state of Hawaii,” Woodson said in an interview. “He came in at a time of pandemic, of extreme stress and he had to make multiple adjustments on a regular basis. I thought he handled it well and I think he is handling his position well.”