Both Princess Cruises and Royal Caribbean Group this month signaled their commitment to the Asia and Australia markets, despite the region’s continued delay in opening their ports to cruise ships.

The Australasia market has been one of the last to come back with any strength, with only a few ships sailing out of Singapore and Hong Kong since the pandemic began.

When Australia said that starting Feb. 21 it would allow international visitors to enter the country, a restart for cruising was not part of the plan: its cruise ban was extended by two months, until April 17.

“Opening up to international visitors is great news for the inbound tourism industry, but Australia is still one of the only major cruise markets in the world with no government plan for reviving domestic cruising,” said Joel Katz, managing director for CLIA Australasia, who added that the industry has “heard nothing from government on how we can move forward.”

According to CLIA’s 2022 State of the Cruise Industry report, out of the 86 countries around the world that have reopened to cruise, only a handful are in the Australasia region.

Princess president John Padgett said on Feb. 1 that the Diamond Princess‘ return to Japan was being postponed until at least June.

“Our focus continues to be getting the entire Princess fleet back up into service in markets that are open, but that market is still not open,” Padgett said during a press conference. “So when that market opens, we’re going to work to get the Diamond Princess back there and operational as soon as possible.” 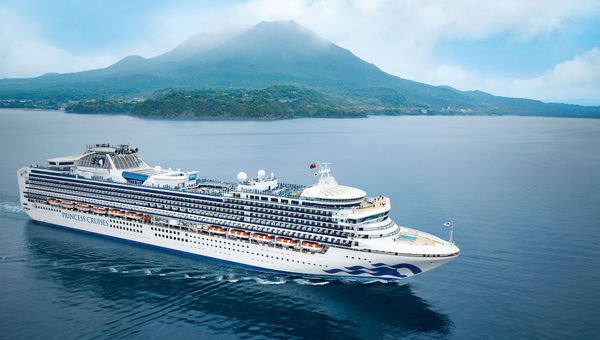 The Diamond Princess’ return to Japan has been postponed until at least June. Photo Credit: Courtesy of Princess Cruises

For now, the line is making other plans. Princess said on Feb. 10 that the Sapphire Princess would launch the line’s first summer sailings from Los Angeles to the Mexican Riviera, Hawaii and the California coast after canceling its planned season of sailings from Hong Kong to Australia and roundtrip Sydney cruises through October.

On its fourth-quarter earnings call on Feb. 4, Royal Caribbean International CEO Michael Bayley reaffirmed Royal Caribbean’s commitment to the China market, despite what he described as a market that has always had its “ups and downs.”

He said that Royal is even looking to fill a possible void left by troubled cruise operator Genting Hong Kong.

“A long-term perspective of China is, we’re in China and we’re gonna make China work, and we see a huge amount of upside and opportunity,” he said, adding that Genting’s troubles could be “an opportunity for us, and our teams in Asia are already planning and leveraging what we think could be those opportunities. But our appetite for the opportunity has not shifted; we think China is always going to be a very important part of our strategic portfolio.”

Nevertheless, Bayley said the ships Royal had redeployed out of China are proving very successful in their new markets. The most recent example is the Wonder of the Seas, Royal’s new Oasis-class ship, which was originally supposed to debut in Shanghai but is instead launching this spring from Florida before spending the summer in Europe.

“The demand and the response to Wonder of the Seas has been incredibly strong,” Bayley said. “We’ve been actually delighted with what we’ve seen in terms of how Wonder has been selling both in the European markets and in the American market. So there has been a silver lining to redeployment efforts out of the China market.”

Bayley predicted that there would be more visibility into China’s reopening once the Olympics have passed.

At Princess, Padgett was equally optimistic about Japan and said the delay is not indicative of its commitment to that region.

“We love that market, and we look forward to getting the Diamond Princess back there as soon as it opens,” he said.

Australia’s peak summer cruise season is the U.S.’s winter, which means that by the time the country’s cruise ban is lifted April 17, the season is essentially over. Many cruise ships have now postponed their reentry for another year.

“We anticipate Australia to open for cruising for its summer season, our winter time,” he said.

Cruise lines that had hoped for a 2021- 2022 season expressed frustration last November when Australia extended the cruise ban through February.

“We’re now in the ridiculous situation where international borders are opening and Australians can travel overseas to cruise, but they can’t sail domestically in their own waters,” Katz said earlier this month.

“Before the pandemic, more than a million Australians took a cruise each year, and we were one of the most prosperous cruise markets in the world.”